Hollandse and Zwitserse Garde in the French Revolutionary period

Starting with the Hollandse Garde (Dutch Guard) which was in the pay of the province of Holland and its proprietor was the Stadtholder William V of Orange-Nassau.
The regiment was raised in 1599 as a regiment of Nassau, since 1674 a guard regiment and since 1702 called the regiment Hollandse Garde.

Since the reorganisation of 1752, the regiment had 2 battalions each with 6 musketeer companies and one grenadier company although formally there were just 14 companies of which the first two were grenadier and the other twelve musketeers. The grenadiercompanies (as in all Dutch infantry regiments) were also referred as Lijfcompagnieën (Life companies)

Regarding its flag; in 1786 the existing flags were under pressure of the then ruling Patriots changed as these didn't like the Orangist heraldric signs which were on the flags.
As with the help of an invading Prussian army the patriots were chased out of Holland in 1787,the Orangists became the ruling class again which resulted in 1788 in new flags (with orangist heraldic signs of course ) for the Hollandse Garde.

The patriot-period colonels flag looked like this (from the Rijksmuseum Amsterdam): 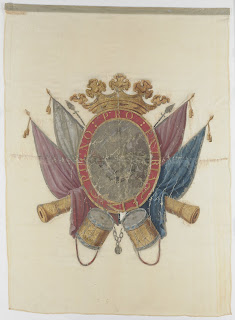 This is the backside which shows (unclear I admit) an arm with sword coming out of a small cloud.
The front side shows the same arrangements only the middle oval is the weapon of Holland (red lion on gold background). I don't have a coloured image of that side but will try to get it.
This 1786 design was changed in 1788 into the colonelsflag underneath of which there are two in the Rijksmuseum so probably both battalions had the same colonelsflag. This is unusual as mostly only the first battalion as fas as we know, had the colonelsflag.
As the pré 1786 designs are known (in the Rijksmuseum also) both flags must be of the post 1788 period.
The post 1788 flags in the pictures show:
The left one is 98*106 cm of which the background colour is ecru or an offwhite. The backside is the same.
The right one is 117*97 cm with also as background colour ecru. Again, the backside is the same as the frontside. 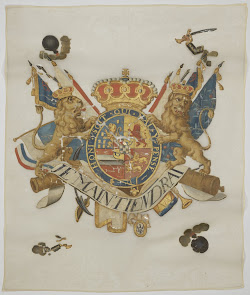 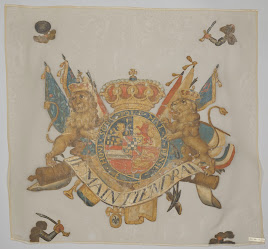 The regimental colour isn't known but there is a picture of the 1st battalion of the guard of around 1770 (underneath) which shows this older design of the white colonelscolour and an orange regimental one. 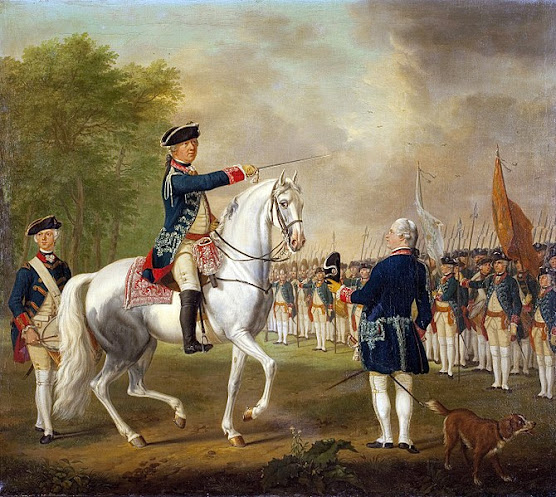 As the design of the post 1788 regimental flag isn't known, I would suggest for now, the same design for both flags, just different background colour.
Note the white/silve tassels on the flagpoles. The flagpoles should according to the reglement, painted black.
Regarding the uniforms, Macalister Loup shows the uniform  as underneath 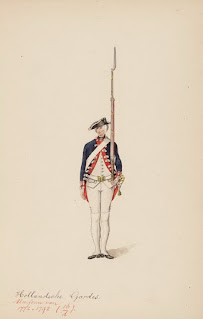 Other pictures of the Hollandse garde are: 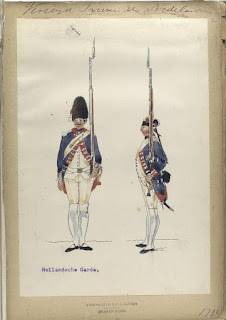 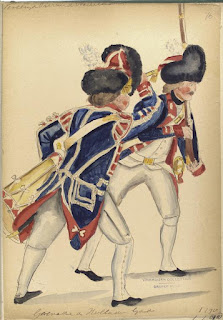 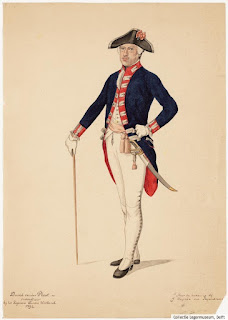 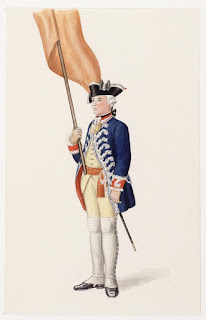 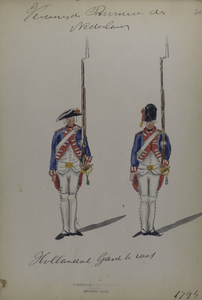 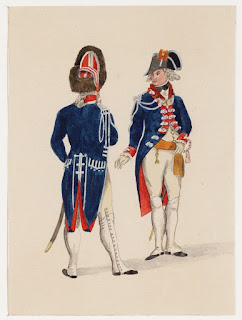 An older picture of an officer show the older grenadier bearskin which was worn probably up to around 1770. After that, the bearskin without frontplate was used and this was the example for the rest of the Dutch army (this is mentioned in the reglement of 1772).
Notice that the bag of the grenadierbeasrkin is red; the same as the colour of the facings. 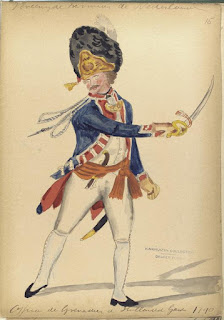 The drummers wore the following: 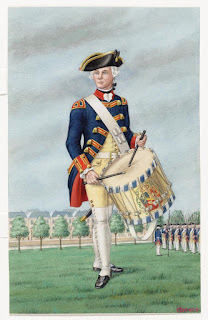 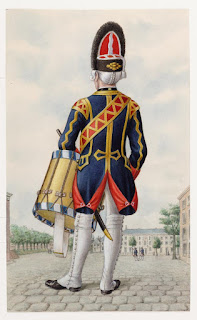 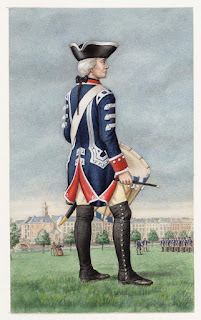 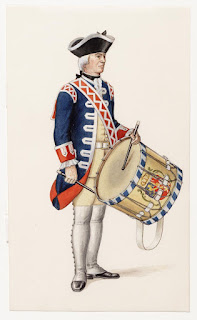 I believe that the first two are musicians with the yellow/gold lacing and the drummers with the white/silver lacing are drummers of the musketier companies.

In the budget of 1792 the regiment is mentioned as consisting of one battalion of 8 strong companies but probably these would be used as two battalions, each of four companies.
All Swiss regiments had no seperate grenadier companies but grenadiers were integral to each company but probably in the field were used as an separate company.
The first company of the regiment was called the lijf company or Prinzen Compagnie as the Prinz of Orange (The Stadtholder) was its inhaber and owner of the first company.

Each company had its own flag (so in total eight flags were carries but the first company had the white colonelsflag and the 7 other companies had an regimental one. 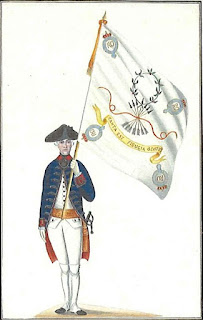 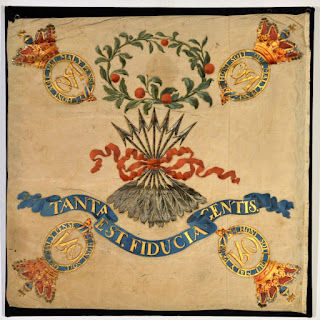 The colonelsflag on the left one is from the Museum at Zürich; the colonels on the right is from the Dutch Military Museum and is acquired from relatives of the last colonel of the regiment. Probably the white is faded.
Both flags look very similar.
The regimental flag shows the very well known Swiss flames design.(picture also from the Zurich museum) 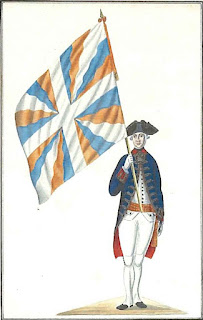 While the Hollandse garde had white/silver tassels on the flag, the swiss flag above shows an orange cravat. In fact all Swiss flags shows the orange cravat.
Some uniforms of the Swiss guard: 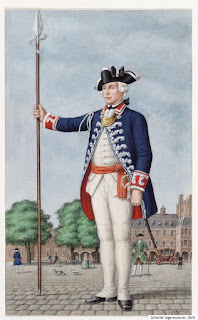 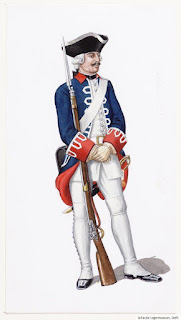 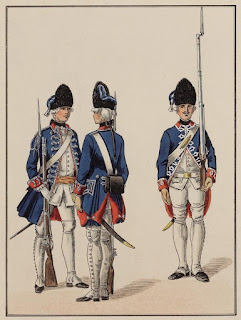 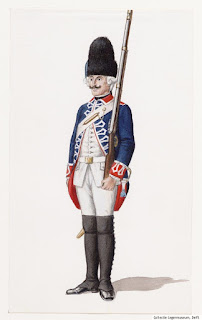 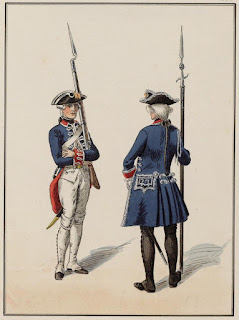 Notice that the bag of the Swiss grenadier bearsskins were blue although the facing colour was red.

Probably again musicians (with yellow lacing) of the Swiss guard. 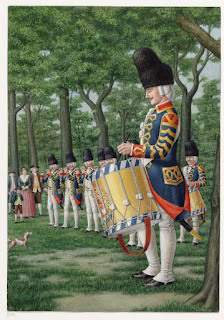 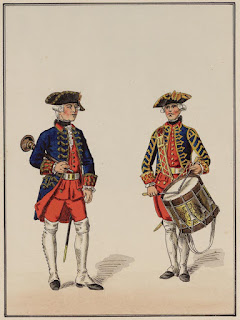